These Cinnamon Rolls have been taken up to the next level with an added Lyle's Golden Syrup Caramel to pour all over the hot, sticky rolls. Decadent, comforting and delicious. You won't regret making it! 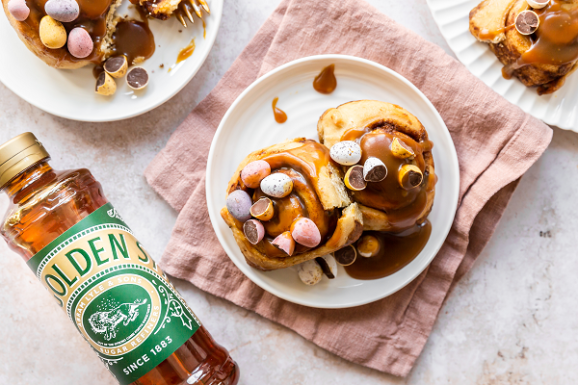 Check out the baker

This recipe was created by Emma Duckworth. Check out her beautiful bakes on Instagram @emmaduckworthbakes.

1. Add the yeast, milk, and 1 tablespoon (15g) sugar into the bowl of an electric stand mixer and mix well. Set to one side for 15 minutes until foamy. Into that mixture, add the flour, remaining sugar, salt, eggs and vanilla bean paste and using the dough hook, mix on low for 5 minutes until the dough comes together.

2. Whilst the mixer is running at a low speed, add the butter gradually, and once incorporated, turn the mixer up to medium speed and knead for 10 minutes. The dough should be pulling away from the sides of the bowl and have formed a 'tornado' around the dough hook.

3. Place the dough ball in a greased bowl and cover with plastic wrap and let rise in a warm place for approximately 1 1/2 hours. Once doubled in size, gently punch down the dough, form it into a rectangle.

4. Grease with butter a 23 x 30 cm (9 x 13 inch) rectangular dish. Line the dish with parchment paper. On a lightly floured countertop, roll the dough into a rectangle measuring approximately 30 x 48cm (12 x 18 inches). Dollop the softened butter all over the rectangle and gently smooth out to the edges using an offset spatula. In a medium bowl, mix the brown sugar and cinnamon and sprinkle evenly all over the butter.

5. On the long side of the rectangle, roll the dough tightly into a long log and then pinch the seam closed with your fingers. Using unflavored dental floss or a sharp knife, cut the ends off the roll as they won't be as filled as the rest of the log. Cut the log into 12 even pieces and place the cinnamon rolls on their sides with scroll facing up in the pan. Leave room around each roll. Drizzle rolls with Lyle's Golden Syrup. Cover with plastic wrap and let rise in a warm place for 45 minutes until they have expanded by about half of their original volume.

6. Preheat the oven to 180C (350F). Remove plastic wrap and bake the cinnamon rolls for 25-30 minutes until golden brown. Half-way through, cover with foil so as not to brown too much.

7. In a saucepan set over medium heat, add the butter, brown sugar, Lyle's Golden Syrup and heat until bubbling, whilst stirring continuously, until butter and sugar have melted. Add the cream, stir until combined and simmer for another two minutes until thickened. Set aside.

8. Once cinnamon rolls have baked, then remove from the over and spoon Lyle's Golden Syrup Caramel over the top. Serve with Easter mini egg chocolates for decoration. Enjoy!